The CT is a special x-ray procedure which has been introduced into diagnostics in the late 70ties. This CT-machine consists of a circular x-ray detector that catches the x-rays produced by a circular x-ray tube turning around the patient. Supported by a computer, image elements that have been created through the absorption of different x-rays in the body are then converted into tomograms. Thus slice-like, anatomically correct tomograms through the body areas examined can be obtained. This method has a high diagnostic significance considering many diseases, particularly for diagnostics of the abdominal cavity (abdomen) and lung considering pulmonary diseases (Ill. 3).

In addition to this, computer tomography is the method to choose considering the clarification of diseases or injuries of bones and the remaining skeletal system. We work e.g. with a modern Spiral-CT that also allows a volume determination of the organs examined. Through this technique organs, such as the liver can be examined in different blood circulation phases (Arterial phase, portal-venous phase). Thus a higher diagnostic safety is achieved (Ill. 4).

Furthermore, three-dimensional reconstructions (3D-Illustrations) of bony structures and – after intravenous injections of contrast mediums – also of arteries can be created that have a great significance for the planning of surgical interventions (Ill. 5b).

Under CT-sight control, also analgesic therapeutic treatments considering dorsal diseases, tissue collection for pathologic examinations, Abscess drainages and other interventions can be performed. These are further described in the chapter “Interventional Radiology”.

The Nuclear Spin Resonance Tomography (MRT) that manages without ionising radiancy plays an increasing role in general radiology. In this procedure protons are used for imaging, although images generated in this way are not produced through x-rays but through irradiation of radio frequency waves that interplay with protons bonded to water (So-called “Nuclear Magnetic Resonance”).

As MRT is carried out without x-rays, it can be repeated discretionary often and used on, for instance, small children without any risk. In general radiology the imaging diagnostic of joints, the spinal column and soft tissues made great progress through MRT; thus ruptures of the meniscus that previously could only be diagnosed operatively (through arthroscopy) can be illustrated fast and without any straining of the patient, nowadays (Ill. 7).

EA further important application area of the MRT in orthopaedic diagnostics is spinal cord examinations; through the possibility of multi-planar illustration this method succeeds more in illustrating herniated vertebral discs than with computer tomography (Ill. 8)

Also vessel diagnostics was revolutionised by the nuclear spin angiography (MR-Angiography; without the use of invasive and thus patient straining angiography, it is possible, nowadays, to concisely illustrate pelvis arteries, renal arteries (Ill. 10) or other vessel territories, in a short examination time.

While the MRT is used in the abdomen and in the pelvis more frequently for urologic and gynaecologic problems, it plays no significant role in the routine diagnostic of lung diseases, as the aeriferous lung only has only a few protons bonded to water that can contribute to imaging.

The intra-arterial angiography has been a very important procedure for decades up to now. Nowadays, it is proceeded through DSA-technique (Digital subtraction angiography). Angiography still is the most important diagnostic method for a direct illustration of vessels in most different body regions. This method has great diagnostic importance, considering in the diagnostic (and therapy, see below) of arterial peripheral occlusion disease (“Intermittent claudication”) or renal artery diseases, if it is about an exact illustration of vessels narrowing and closure in the Beckenbeinstrombahn (Ill. 2) or renal arteries (Ill. 11). Diagnostic angiographies are performed ambulant. As the vessel region examined is checked through an angiography catheter, mostly passed through a leg artery (so-called “trans-femoral approach”), the patient must rest three to four hours after the examination to avoid a hematoma in the ridge; after this, he is allowed to go home. Only in the last year, about 400 arterial angiographies were performed in our institute, thereof about 150 micro-therapeutic interventions (so-called “vascular interventions”).

In the last 12 months, in our institute there have been more than 70 CT-controlled samples intakes, 90 PERIRADIKULÄRE WURZELINFILTRATIONEN and about 230 CT-controlled facette blockades without complications, but with very good results.

In case of certain illnesses, it is necessary to take tissue samples that can be used to specifically plan and perform treatments. Such tissue samples can be taken CT-controlled from lymphatic knobs, lung processes, liver focuses and from bony structures, e.g. the spinal column (Ill. 12a-c).

As these punctures are performed very preserved with thin puncture needles, an intervention can be accomplished ambulant.

A further important therapy modality is the CT-controlled pain treatment of backaches, which (with herniated vertebral discs) are performed as so-called “periradikuläre Nervenwurzelinfiltration” (Ill. 13) and with degenerative changes of the small vertebral joint – spondylarthrosis – as “CT-controlled facette blockade” (Ill. 14); the principle of treatment is the local application of long effecting pain killers (Local anesthetic) and cortisone preparation that have a inflammation-inhibiting effect. In case of a herniated vertebral disc, a resorption of the prolapsed intervertebral disc tissue through an induction of body-own granulation tissue. In the area of small vertebral joints often pure alcohol is injected to denervieren joints analocially to facette coagulations and to guarantee long-time analgesia. These pain-therapeutic interventionsare not only performed at the lumbar spine, but also at the breast and neck spinal column.

In the last years the minimal invasive therapy of vessel stenoses and vessel closures in most different body areas have spread very much. The principle of vessel narrowing treatment on a radiologic way is the PTA (Percutanic Transluminal Angioplasty) using a balloon catheter. Using this method, balloons installed on vessel catheters are brought into the area of the narrowed artery sector and stretched, afterwards; the atherothrombotic wall deposits, leading to vessel narrowing, are therby pushed into the vessel wall. The vessel narrowing is removed on this way (Ill. 15a-c).

In the areas of the leg arteries (femoropopliteales Stromgebiet Ill. 15a-c) the success rate in angioplasty is at about 75%, in the pelvis etage (Ill. 16a-d) it is even higher with 90%. Also the long-time results (Offenheitsrate after 5 years) in the Beckenstromgebiet are 84% higher than in the area of leg and lower leg arteries, where a long time success rate can be calculated at around 65-70%. If there is a rupture of the vessel wall during treatment (so-called dissection),the damaged vessel can be repaired through an implantation of a vessel orpthesis (stent) in the same session. IN the pelvis etage the better long time results result in a tendence to treat diseased vessel sections with stents directly (Ill 16a-d).

Furthermore, there is a possibility to reopen closed leg arteries through locally in the vein applicated medicaments dissolving clots in a biochemical reaction (Ill. 17); in our institute we practise a so-called “short time lysis” at which the medicament rtPA /synthetic created tissue-plasminogen-activator) is infused locally into the throbus over a time span of 1-5 hours with adose of 10 mg/h. Through this therapy it often succeeds to avoid an otherwise impending loss of an extremity (amputation).

If the lysis therapy of a vessel closure in the Beckenbeinstrombahn is planned, it must be known that it is definitely worthwhile – in dependence on the cross section of the lysed vessek – to open also older closures. As rule of thumb it generally counts that

The vessel closure can successfully be treated, afterwards.

b>The balloon dilatation treatment of Beckenbeinarterien (Ill. 15; Ill. 16), but also of renal artery stenosis (Ill 18a-c) is performed in our institute; thus the patient does not need to stay in hospital after complex vascular interventions. 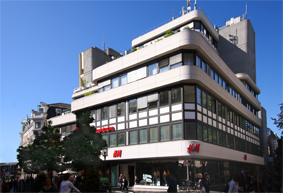